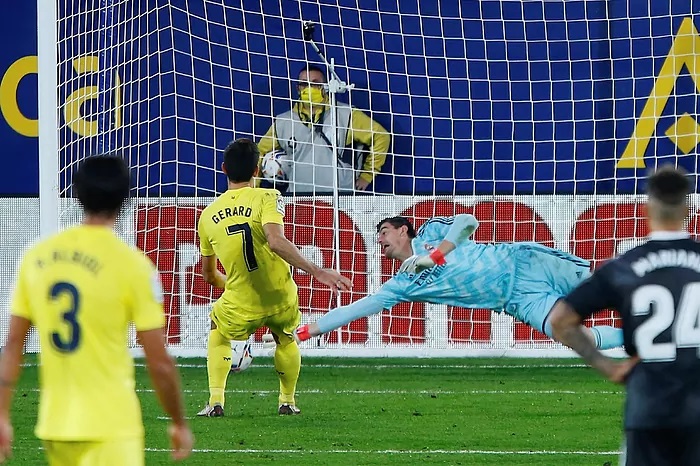 An error by Courtois, who measured badly against Chukwueze, facilitated the 1-1 of Gerard Moreno, LaLiga top scorer in the company of Messi.

A triple change completely changed the landscape at La Cerámica, where Real Madrid had controlled for 60 minutes with striking solvency. The speed and power of Samu Chukwueze, Jeremy Pino and Pervis Estupiñán unbalanced the defence of Zinedine Zidane, frustrated by the fourth adverse penalty in two consecutive days. Since 2013, the whites have not suffered a similar punishment from 11 meters.

“We deserved much more today, especially for the first half. It bothered me not to win because of the efforts of my players,” said Zidane, who faced the afternoon without Sergio Ramos, Casemiro and Karim Benzema, the backbone of his board. “We have clearly lost two points,” lamented the French coach.

Thibaut Courtois measured badly against the Nigerian winger and Gerard Moreno executed with the same coldness as Carlos Soler in Mestalla. Not by chance, the Spanish international leads the top scorer in the company of Leo Messi (15 goals).

“I WANTED TO HOLD OUT TO THE MAX”

The decision of Hernández Hernández did not admit a reply to the attack by Courtois, who on Wednesday had already starred in a clamorous against Denmark. The bad decision of the Belgian, in an afternoon where the locals did not even add a shot on a goal beyond the penalty, was fatal for Madrid. In his 90 games with Madrid, Courtois has had to face 15 penalties and only stopped one taken by Willian José in Anoeta (3-1). Also, Rubén Alcaraz sent another to the clouds in Zorrilla.

“We always study rival goalkeepers. He held on, I also wanted to hold out as much as possible, and I was able to shoot tight,” explained Gerard, happy with the improvement in the second half of his team, which already has seven league games without losing. A streak almost antagonistic to that of Madrid, who left eight points in the last five games.

More in The World Fear in Madrid due to the injury of Sergio Ramos, the bad news of the win against Germany The world From turning a blowjob from his girlfriend into the ‘no more’ of modernity to being an apostle of Trump and opposing the female vote The world The numerous casualties and the fatigue of some players unaccustomed to 90 minutes, ended up weighing on a team that on Wednesday plays its future in Milan. “In the first half, we were excellent, and we did not concede a single clear chance. Then they have come to us with more problems, not many more, but just enough to tie,” said Nacho Fernández, very effective in his position as left central.

Another regular substitute who could draw positive conclusions was Mariano Díaz, author of the 0-1 with an excellent header and a thunderous start that would have ended in something better if Lucas Vázquez found the last pass first. Until now, the Barcelona striker had only participated in the final stretch of Mestalla, but his attacks were always a nuisance for Raúl Albiol. Since his arrival, he has scored 11 goals in 22 shots, with an average of one goal every 90 minutes.