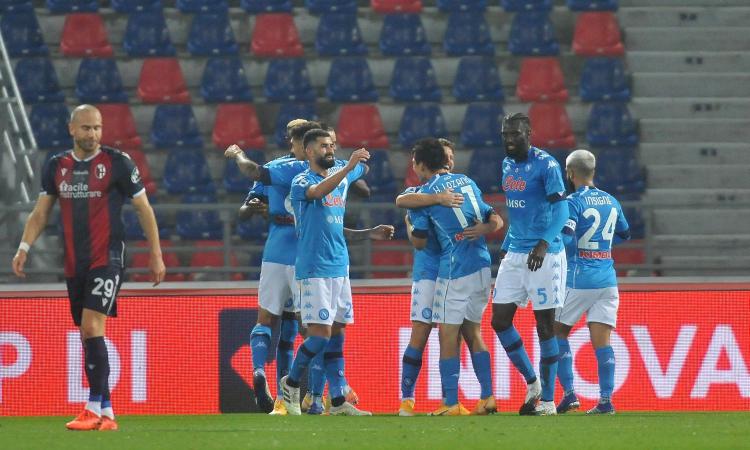 The first postponement of Sunday sees the match at 6 pm at the Renato Dall’Ara stadium in Bologna, between the hosts led by Sinisa Mihajlovic and Gennaro Gattuso’s Napoli: the Neapolitans, veterans of the Europa League victory in Rijeka, must redeem himself after last week’s home knockout against Sassuolo, looking for the three points to bring himself to minus 2 from the leaders Milan and minus 1 from the neroverdi, waiting for the 3-0 knockout sentence against Juve. For their part, the Bolognese, winners against Cagliari after 3 knockouts in a row, are looking for a bit of continuity to get out of the hot zone of the standings. Tribune for technical choice for Mario Rui and Ghoulam.

STATISTICS AND BACKGROUND – Challenge number 123 in the history between Bologna and Napoli in A. The Emilians have not lost in three games against the Azzurri after a streak of 6 defeats in a row. Napoli has scored 14 matches against Bologna: if they still go on the net, it would equal the record of 15 games in a row on the net set in January 2019 against Lazio. There are only two draws in the last 16 Serie A matches played at home by the rossoblù: it happened last July. A good tradition for Gattuso, who has faced Bologna five times in Serie A without ever losing (3W, 2N) and relies on Dries Mertens: the Belgian attacker’s centres in Bologna are 11 out of as many games, his favourite target. In front of him will have Roberto Soriano (four goals, three assists) and Musa Barrow (due reti) che hanno preso parte all’80% di gol segnati in casa dal Bologna Nella Serie A 2020/21.