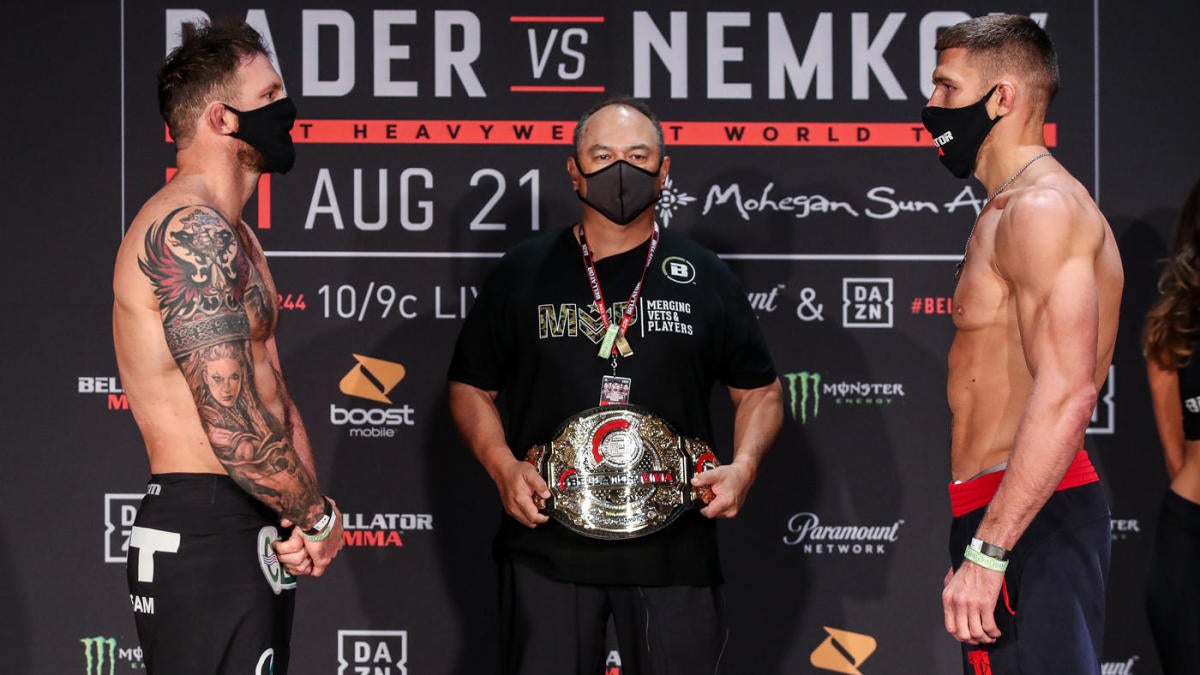 In the three years since he captured the Bellator MMA light heavyweight title in his first fight with the promotion, Ryan Bader has done nothing but add to his growing resume. Bader moved up to heavyweight and captured a second title by winning the Bellator Heavyweight World Grand Prix.

The Bellator 205-pound division over that same time, largely toiled under the radar as the next contender for Bader’s title was being formed.

On Friday, for the first time since 2017, Bader (27-5, 1 NC) will move back down in weight to defend his title when he meets the red-hot Nemkov (11-2) in the main event of Bellator 244 (Paramount Network/DAZN, 10 p.m. ET) from the Mohegan Sun in Uncasville, Connecticut.

While Nemkov is expected to be a challenge for Bader in the same way that both Phil Davis and Linton Vassell were for the former UFC veteran when he first arrived on the scene in the Bellator light heavyweight division, the question is how much?

Can’t get enough MMA? Subscribe to our podcast State of Combat with Brian Campbell where we break down everything you need to know in the cage, including a complete preview of Friday night’s card with Hall of Famer ‘Suga’ Rashad Evans below.

That’s where things might get a bit interesting in this fight.

For everything Bader has done to impress in recent years while receiving plenty of global acclaim for doing so, Nemkov has been equally impressive just to much less fanfare. The 28-year-old Russian striker is riding a six-fight win streak, including his four fights since joining Bellator, and is fresh off three consecutive victories over former Bellator champions Liam McGeary, Davis and Rafael Carvalho.

The oddsmakers have taken notice as Nemkov, a four-time Combat Sambo world champion, has been installed as just a +110 underdog by William Hill.

“I’ve been watching him when he was coming up. He has beat three former champions and obviously you take notice of that,” Bader told CBS Sports HQ on Wednesday. “But when he went to a split decision with Phil Davis and ended up beating him, that’s when I said, ‘OK, this guy is the real deal.’ I’ve been in there with Phil Davis a couple times and I know how good he is. At that point I kind of took notice.”

Along with edging Davis, the 6-foot Nemkov finished McGeary with leg kicks in Round 3 and submitted Carvalho last October to secure the title shot.

“When I was away and at heavyweight, he beat his way through light heavyweight and made himself the No. 1 contender,” Bader said. “I’m looking forward to this challenge. He brings it hard and has good leg kicks and good kickboxing, good Sambo. That being said, I have all that plus wrestling, plus the experience and the cardio factor.”

Bader said he meticulously kept himself in great shape during the quarantine not knowing when Bellator would call for his next fight or what division it would take place in. Bader-Nemkov was originally booked for May 9 in San Jose, California, but was postponed and Bader wasn’t sure whether a heavyweight title opportunity would fall into place.

“[The weight cut] was actually pretty easy,” Bader said. “The thing is, too, we didn’t know who we were fighting until four and a half weeks ago, but I always keep myself in good shape and a good weight to be able to jump in between. That’s why I can do it. I was super strict, kept a log of everything I ate and weight came flying off. I left Arizona just under 220, my weight is good and I feel really the best I have felt. I feel really sharp.”

Bader believes the later this five-round title fight goes, the more it plays into his hands that a victory by stoppage is inevitable. He does concede, however, that his younger opponent has had so much success being aggressive in the early going that the opening rounds on Friday could easily turn into a free-for-all.

Make no mistake, Bader is in for a fight in this one considering Nemkov’s size, demeanor and punishing striking style. And while Bader’s wrestling has the potential to play a key role in the outcome, particularly if he can shoot early to slow the pace down, Nemkov’s history of filthy leg kicks can’t be avoided.

Bader is very much a different fighter thanks to his evolved striking and how much that offsets his already strong grappling game. But if Nemkov can find success from the outside by targeting the champion’s legs and forcing him into more of a standing duel, seeing the title change hands is very much a possibility.

Nemkov will need to be weary of Bader’s sneaky left hook that has become a finishing weapon for him, along with a greatly improved jab. But Nemkov better be certain to work quick, as Bader mentioned, as the champ has enough cardio where if you give him the chance to rag doll you and win it without having to take the risk of being caught standing, he very much will.