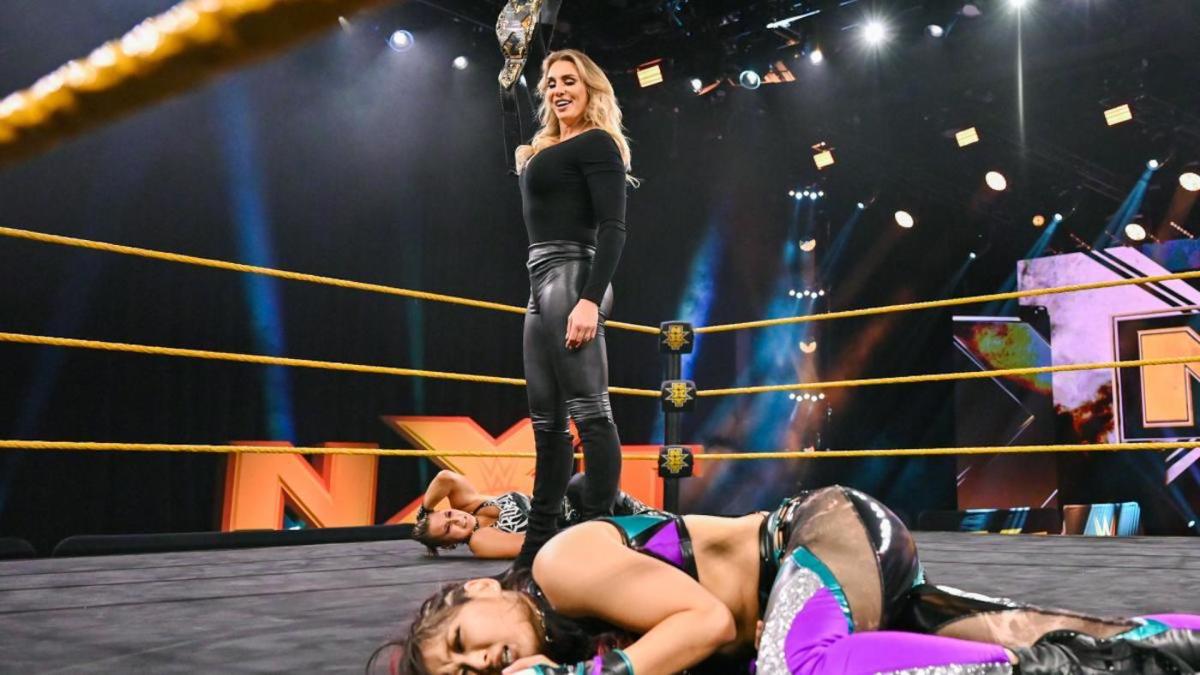 The loyal NXT faithful has been waiting on the return of the TakeOver specials to the WWE Network. That time has finally arrived after the coronavirus pandemic canceled the WrestleMania weekend show scheduled for Tampa as NXT returns to the pay-per-view platform on Sunday, June 7 with NXT TakeOver: In Your House. The In Your House name previously served as the branding for PPVs that were not part of the traditional “Big Four” events on the schedule, and on Sunday night, NXT brings it back to the forefront of the pro wrestling world with a loaded card set to headline.

In the main event, Adam Cole and Velveteen Dream clash for Cole’s NXT championship. Cole has now held the title for more than a full year, and will look to continue arguably the greatest championship reign in brand history. In other notable title action — in addition to the scheduled North American championship match — Rhea Ripley and Io Shirai will challenge Charlotte Flair for the NXT women’s championship on the heels of Flair winning the title from Ripley at WrestleMania 36.

NXT TakeOver: In Your House predictions

There’s a lot of talent in this match, but picking a winner comes down to who needs the win here. LeRae has been making waves with her push for respect. Her duo with husband Johnny Gargano could come out of TakeOver looking very strong if her group gets the win and Gargano leaves with the North American championship. There’s just overall more benefit to the heels winning this one. Pick: Candice LeRae, Dakota Kai & Raquel Gonzalez win — Brent Brookhouse (also Jack Crosby, Adam Silverstein)

Following a brief stint in which he was in the North American title picture, a feud with Balor wasn’t the worst landing spot for Priest. While it’s naturally possible that Priest could get the victory here through some nefarious means, Balor should come away with the clean victory in this first match as retribution for the attack. This won’t — and shouldn’t — be a one-and-done in this program, however, as Priest should continue by any means necessary to make a name for himself at the expense of the veteran Balor. Pick: Finn Balor wins — Crosby (also Brookhouse, Silverstein)

You can’t bring Kross in as a threat and have him lose his first big match. Pairing him with Ciampa is a great move in that it allows Kross to establish himself as a top-level threat against one of the brand’s cornerstones. If Kross is going to be a big player as a dominant force, he won’t be losing anytime soon, and certainly not this weekend at In Your House. Pick: Karrion Kross wins — Brookhouse (also Silverstein, Crosby)

Lee’s reign with the title to this point has been a bit lackluster, though that’s not quite his fault considering he won it in late January and most of his defenses have been in smaller or empty arenas — all against large opponents.  Gargano should give Lee the marquee match he has long needed, and seeing as Johnny Wrestling is now a heel who is not at the top of the card, he can certainly afford to take the loss. Unless Lee is destined for the main-event scene or an ascension to the primary roster — both of which are possible — he should get the opportunity to continue growing in this role. Pick: Keith Lee retains the title — Silverstein (also Brookhouse)

I think it’d be a mistake for Gargano to come up short here as he settles into this new heel role alongside wife Candice LeRae. He simply has to get the job done and become a two-time NXT North American champion, no matter the measures he has to take to get there. Plus, selfishly, I would like to see Lee get the shine he has long deserved on a bigger platform of either Raw or SmackDown. Pick: Johnny Gargano wins the title — Crosby

Putting the NXT championship on Flair has largely been a mistake as it has stagnated the women’s division and completely slowed the momentum that Ripley had going into WrestleMania. As such, it is time that WWE corrects that mistake and does so appropriately with Ripley regaining the title — hopefully by actually pinning Flair in this triple threat match. While it would be great to put the title on Shirai, who is long deserving of the opportunity, I would prefer Ripley to regain the strap and get her win back all at once. Ultimately, I believe that is the direction that NXT will go as there are far more heel challengers available than there are faces. Pick: Rhea Ripley wins the title — Silverstein

Ripley getting the title back makes plenty of sense as Flair moves off NXT and back to the main roster. But Ripley winning feels like the obvious path, and that’s rarely the most interesting path to follow. Shirai getting a run would be intriguing and do a lot to kickstart the stalled-out NXT women’s division. An increasingly frustrated Ripley chasing Shirai for a while would give us a strong title program that could get some momentum going again. Flair vs. Ripley 2 can then be kept on the back burner until a bigger main roster program down the line. Pick: Io Shirai wins the title  — Brookhouse (also Crosby)

Going the cinematic direction with the match is hit-or-miss, but with Cole having held the championship for more than a year, things start to hit a point where you wonder what’s left. At some point, they’re going to give Dream a run on top, and with rumors swirling about Cole’s contract being up in the near future, this might be that time. Either way, Dream needs the opportunity to be “the man” in NXT unless there is a plan to move him to Raw or SmackDown in the near future.  Pick: Velveteen Dream wins the title — Brookhouse (also, Silverstein, Crosby)